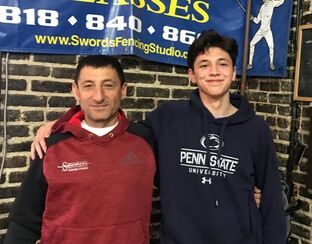 College Announcement
Swords is so proud to congratulate Stafford Moosekian on his acceptance to Penn State. A part of the Swords family since 2011, he has competed in 8 World Cups, made several appearances on NAC final strips, and was a member of the 2020 Cadet US Championship team. We know he will bring the same level of dedication and determination to the Penn State fencing team, and we look forward to hearing great things! Keep smiling, Stafford! 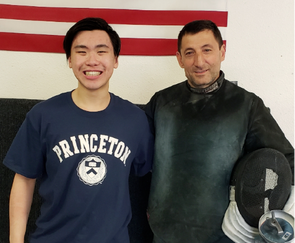 College Announcements
Swords is thrilled to congratulate Ryan Lee  on his acceptance to Princeton. Ryan has had an amazing journey at Swords, and he has cheered on others as much as he has been cheered. He has distinguished himself on the strip nationally and internationally, and we have no doubt he will be as great a member of the Princeton Class of  '25 and the fencing team as he has been a member of Swords Fencing Studio! Among his many accomplishments:
Gold, Cadet, November NAC
Bronze, Cadet, Budapest World Cup
Top 8, Junior, Junior Olympics
Swords Fencers Distinguish Themselves at NCAA Championships!

​We are excited to share the achievements of some of our "older" fencers!
Stephen Ewart and Irene Yeu distinguished themselves at the NCAA finals at Penn State this weekend!

Stephen Ewart, Notre Dame '22, fenced the NCAA finals, proving himself a key player in securing Notre Dame's 11th National Championship, tying ND football for the most national championships by any program at ND (football? What is that???). To read more: Notre Dame Fencing

﻿Irene Yeu, Stanford '24, placed fifth in the NCAA (and fenced another Swords fencer - shout out to Nicole Agob, Air Force '21). Maybe Stanford should rethink their exit from NCAA in fencing??? We think so. To read more: Stanford Fencing
​ 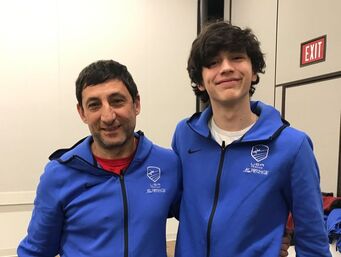 Congratulations to Stafford Moosekian who earned a spot on the
​World Championship Cadet Team 2020. 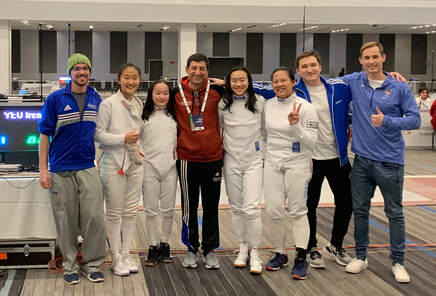 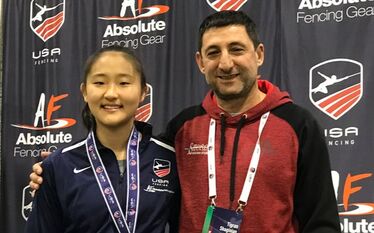 Congratulations to Irene Yeu who took Gold in Juniors at the January North American Cup! 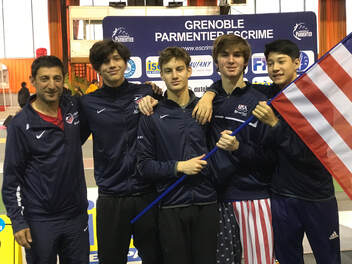 ​Team USA Takes Gold at the Cadet World Cup in Grenoble, France. Swords Coach Tigran Shaginian coached the Team USA 1, including Swords fencer Stafford Moosekian to victory in a nail biting finish against Switzerland. Team USA 1 came back from a 12 point deficit to defeat the Swiss 45 - 43. 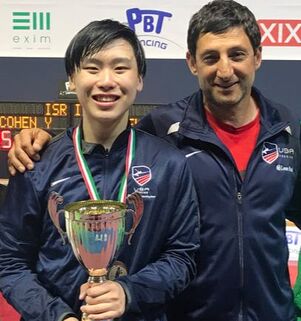 Congratulations to Ryan Lee and Coach Tigran for taking Bronze at the
​2019 World Cup in Budapest! ​ 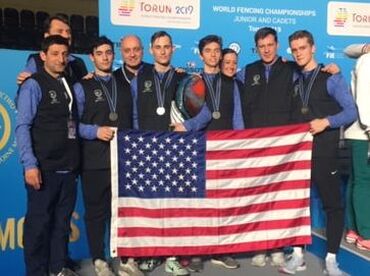 Congratulations to the 2018 USA Junior World Cup Team for the Silver Medal at the World Cup Championships in Torun, Poland!  This is the first Junior team medal in 20 years, since 1999, and the first Silver medal ever! Stephen Ewart, in addition to being anchor for the team, placed 7th in the individual World Cup Championship event.  Huge kudos to Stephen and Coach Tigran!  All the effort and training pays off!